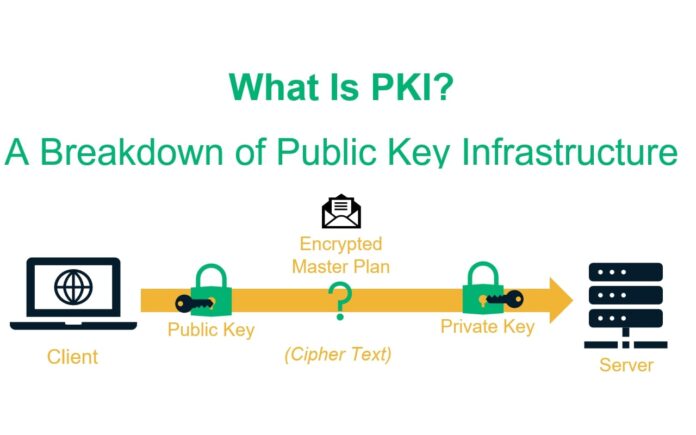 PKI, or public key infrastructure, is a system for securely exchanging information over the internet. It encrypts, authenticates, and digitally signs messages between two parties. The goal of PKI is to ensure that only authorized users can access sensitive data and that all communication between those users is secure. In this article, we will explore the basics of PKI and why you should try to improve PKI program management within your business.

How Does PKI Work?

When a user requests access to an application or service protected by PKI, they must first obtain a digital certificate from the CA. This process involves verifying the user’s identity through email address verification or SMS code verification. Once the user has been authenticated, they receive a unique digital certificate containing their identity information and encryption key. This certificate allows them to securely access applications and services protected by PKI without entering usernames or passwords each time they log in.

In addition to authentication, PKI also provides encryption services that protect data sent between two parties from being intercepted by outside sources. When sending data over an encrypted connection, both parties use their unique encryption keys to scramble the data before it is sent across the network. When it reaches its destination, the receiving party can unscramble it using its encryption key so they can only see what was sent. This ensures that confidential data remains secure even if someone were able to intercept it in transit.

PKIs also provide non-repudiation services which allow organizations to prove that certain documents were created or signed by specific individuals at specific times—which can be critical in legal proceedings or other situations where proof of authorship may be necessary. Non-repudiation services provide cryptographic evidence that documents have not been tampered with since they were created or signed—allowing organizations to verify their authenticity without any doubt.

When To Use PKI?

PKI is often used to protect access to sensitive information such as banking or medical records or when transferring data between two parties in a secure manner. It can also be used by organizations that must maintain non-repudiation of documents they have created or signed. By using digital certificates and encryption keys issued through a CA, organizations can ensure that only the intended recipient can access the data and provide proof that it has not been tampered with.

Using this type of infrastructure can benefit organizations that need to maintain secure communication with their users or customers. It also provides a layer of security that is difficult to achieve without PKI—allowing organizations to protect sensitive data from unauthorized access or manipulation.

Public Key Infrastructure (PKI) is an essential tool for online security that provides authentication and encryption services for users attempting to access applications and services on the internet. By verifying identities through issuing digital certificates, encryption keys allow users to securely communicate with one another without having their data intercepted by outside sources—ensuring confidentiality when sending sensitive information over networks such as email or file-sharing platforms like Dropbox.

Additionally, non-repudiation services provide cryptographic evidence that documents have not been tampered with since they were created or signed—helping organizations prove authorship without any doubt if needed in legal proceedings or other scenarios involving document authenticity verification. Understanding how these technologies work together helps us understand why PKI plays such an essential role in online security today!